The Making of Future Electronica 2

In this week’s edition of The Journal, we sat down with Lewis – the producer behind Future Electronica 2 and talked about his fondness for Xfer Record’s Cthulhu, what inspired him to produce the Future Electronica series and his secret recipe for improving your production skills.

Tell us a little bit about your studio setup.

“I’ve always had a relatively small studio setup with just some speakers, a keyboard and computer. It wasn’t until recently that I decided to acoustically treat the room with reflectors and diffusers, which have made a huge difference and helped my mixing substantially. It’s by no means a professional setup but it does the job.

“I use an Apple Mac Pro, an M-Audio Keystation 49 and a pair of Tannoy Reveal monitors speakers. The Tannoys are a really great budget solution for a crisp, clear mid and high range and the Mac Pro is a beast in terms of computer power.

“Probably my favourite piece of gear I have though is my Subpac. It’s basically a unit you wear which makes you feel sub end frequencies properly without making any external noise. This makes mixing those low end frequencies a hundred times easier as you don’t have to worry too much about treating the room for bass – plus it’s a lot of fun.”

Future Electronica 1 & 2 are both fantastic. First, what got you into the genre, and second how long have you been producing this style of music?

“I’m not really sure when I first heard this style of production. I think it was Throttle’s collaboration with The Freestylers – Push Up. I had been struggling with how to get the balance between melody and groove right in my own productions and this track just mixed the two perfectly. I think by stripping the melody back a bit you can give a track a lot more space and energy. That’s one of the things I love about the genre, there’s a lot of room for cool little synth licks and drum fills in between the chords.

“I’ve only been producing this style within the last year really. It’s been great to branch away from using purely digital sounds and experiment with organic instruments and sampling.”

“I love to use Xfer Record’s Cthulhu plugin. It’s basically a chord generator plugin with which you assign full chords to individual notes on a keyboard. I’ve created some patches with lots of 7th and 9th chords which are great to play about with. A common feature of the Future Bass genre is unique ‘off’ sounding chords and this allows you to create them with ease.” 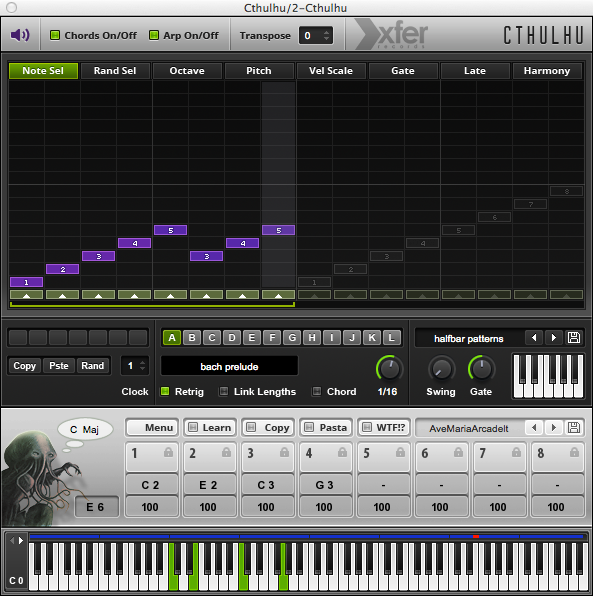 In the box, outboard gear, or a little bit of both?

“I use plugins in my productions which I personally think can achieve very similar results to outboard gear. Particularly in Future Bass, a lot of the sounds are fat, in your face and over-compressed, so using outboard gear seems a bit pointless as you wouldn’t be utilizing it properly.

“With regards to synthesizers though, I think the difference in the sound quality with analogue synths is huge. They tend to sound a lot richer and more organic compared to digital instruments.”

What DAW do you use, and are you interested in trying new DAWs?

“I’ve always used Cubase for my productions but I hope to learn Ableton properly soon. I love the live aspect of it. I’d also like to put together some project templates one day and it seems Ableton is what a lot of up and coming electronic producers are using.”

What are you go-to plugins?

“I tend to stick with the same plugins with every track I do. For distortion and saturation I use Camelphat’s Camelcrusher and Fabfilter’s Saturn. For EQ Fabfilter’s Pro-Q. For compression, Cubase’s inbuilt compressor or Fabfilter’s Pro-C.

“In terms of instruments it’s always Native Instruments Massive and Kontakt. Kontakt is great as there are so many organic instrument libraries which are great for stuff like xylophones, Rhodes, pianos, and strings. I like to layer a lot of sounds together for synth sounds such as super-saws. For leads NI’s Massive is great as a simple go-to synth.”

Any tips or advice for aspiring producers?

“I would say the key thing would be to practice over and over again until your ears are used to the frequency spectrum. Once you know what elements go where, spectrally, you’ll find layering sounds comes about naturally and you can get into the actual creative process without stressing over technical details.

“A good technique I found that really helped with this was recreating my favourite tracks from scratch whilst A/B’ing the mixdown. You can really learn a lot from breaking tracks down and analyzing them.”

The Making of Poolside Electronica

In our latest edition of The Journal, we picked the brains behind the two producers who meticulously crafted the party-vibed release, “Poolside Electronica.” We discussed…

Chord Generator VST Particularly in Future Bass, getting unique sounding chords can make your tracks really stand out. One way to do this is by using…

The Making of Retro Future

In this week’s Journal entry, we caught up with the producers behind Retro Future and discussed favourite outboard gear, tape machines, vintage synths, and much…

The Making of Future Soul 2

This week we caught up the producer behind the best-selling futuristic series: Future Soul. How did you prepare yourself to get into production mode for…